Explorer: In the Cascades, a Trifecta for Outdoor Enthusiasts SEPT. 17, 2014

The glacial water often used to irrigate helps create “this wonderful minerality that makes Chelan wines unique — a brisk, almost wet-stone feeling in your mouth,” said Judy Phelps, an owner, with her husband, Don, and winemaker at Hard Row to Hoe Vineyards (hardrow.com). Hard Row to Hoe, known for a cabernet franc with whiffs of spice and chocolate, opened in 2006, though it did so under the less-than-memorable name of Balsamroot Winery and Vineyard, Ms. Phelps said. Hiring a historian to dig up local stories, they rechristened the winery in 2008 with a saucy nod to miners of the late 1930s who used to row across the lake at night to a waterfront brothel. Sample the Shameless Hussy viognier, which has fruits that pop; a sharp eye will see silhouettes of nude women that pop out of the antique-style wallpaper. 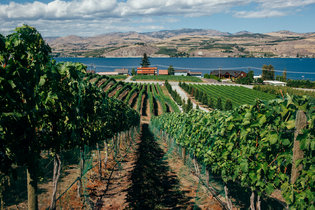 To underscore the up-and-coming region’s appeal, Lake Chelan’s winemakers said they’re emphasizing the topography of the lake as ideal for winemaking to distinguish it from the more than 800 wineries in Washington State, and beyond. At Nefarious Cellars (nefariouscellars.com), its name derived from the surname of the owners, Dean and Heather Neff, the husband-and-wife team splits the winemaking duties: He does the reds; she, the whites. “You’re getting two very different perspectives under one roof,” said Ms. Neff, who studied winemaking in Oregon’s Willamette Valley with her husband before opening Nefarious in 2006. Perched above the lake with dramatic views, the winery typically sells out quickly, closing for winter. 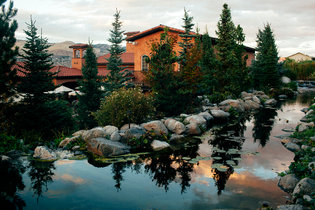 Tsillan Cellars is modeled after a Tuscan villa. Credit David Kasnic for The New York Times

The majority of Lake Chelan’s wineries remain open in winter, many with limited hours, such as Tunnel Hill Winery (tunnelhillwinery.com). The winery and tasting room are housed in 1930s buildings constructed of stone salvaged from blasting the nearby Knapps Hill highway tunnel; hence, the winery’s name. Denny and Jaclyn Evans, former apple growers, switched to grapes in 2001 and have made a name for themselves with a silky, spicy pinot noir. Tunnel Hill’s assistant winemaker, Michelle Fanton, spent six years in the Finger Lakes region of New York and said the two regions have a lot in common. But while Lake Chelan was initially thought to be ideal for the cool-climate grapes that thrive in the Finger Lakes, like pinot, chardonnay, riesling and gewürztraminer, “we’ve come to realize that because we’re a little drier, because we’re also high desert and, in certain areas, a little warmer, we can also grow a lot of other grapes as well,” Ms. Fanton said.

At Tsillan Cellars (tsillancellars.com), modeled after a Tuscan villa, the owner, Robert Jankelson, has his own ideas about how to set apart his winery from the increasingly crowded field cropping up around Lake Chelan. Tsillan Cellars, which opened in 2004, produces all estate-grown wines but also features a natural amphitheater, waterfalls, stone bridges and a 35-foot bell tower as a backdrop for its tasting room and Sorrento’s Ristorante, the on-site restaurant owned by the chef, Gennaro Criscuolo. Dr. Jankelson, a dentist by profession who spent 40 years teaching dentistry around the world, envisions transforming his winery into a world-class spa resort. “Even if only 200 of Washington’s 800 wineries are making great wine, that’s still a lot of competition,” he said, “so you had better have a story to go along with a great wine.”

View all posts by Angie Carson →